a quarter the moon

hides mars behind its back.

so that even the moon grows

I stand in the cold air

(with thanks to Simon for asking) 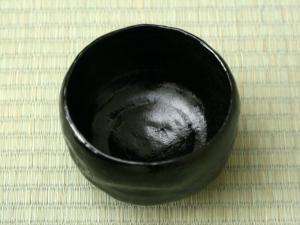 A discussion about Zen aesthetics on our online sangha, and a serendipitous stumbling across an article on Tomoe Katagiri’s teachings on sewing practice, got me thinking about her, particularly studying tea ceremony with her. I posted one little story, and a friend from the sangha asked if I’d tell a little more about it. You only have to ask me once!

Around 40 years ago some friends of mine, knowing I was studying Zen, went into a Japanese imports and art shop that was in downtown Minneapolis in those days looking for ideas for a birthday gift. When they told the proprietor I was a student of Zen, she asked if I was also a student of tea ceremony. They told her they weren’t sure, and she responded, “If he isn’t, he should be.”

So, on my birthday I opened up a box containing a beautiful ceramic bowl, and some odd implements primarily made of wood or bamboo—a whisk, a ladle, and a small scoop. As I didn’t know much yet about tea ceremony, they read the look on my face and explained what the woman had told them. With the imperative added to her “he should be” they essentially said, “None of this was cheap, so you WILL be learning tea ceremony!”

With just a few questions, I discovered that Katagiri Roshi’s wife had studied tea ceremony, and could give lessons. I didn’t know Tomoe-san well. She was a slight woman with short hair and glasses, and an easy smile, who didn’t talk a whole lot. When she did it was in broken English, and mainly to the women around the Zen Center. My friend Catherine worked in the Asian Arts department at the Museum of Arts and also wanted to learn tea. Before I knew it the three of us were meeting regularly, one or two mornings a week after morning zazen and service, in an empty upstairs room in what was Tomoe and Katagiri Roshi’s apartment upstairs in the house. It was white walled, with tatami covering the floor. It was used by Roshi for dokusan during sesshins, so I’d been in there a few times before.

When I arrived for the first lesson, she had a large cast iron pot already filled with hot water, steaming into the room. A spot in front of it was laid out with the implements I’d recognized from my box, and she motioned to two spots across from her where we were to kneel and sit, both as students and guests, as she prepared the tea.

My first thought when asked to tell a little more about studying tea with Tomoe, was that it would be hard to tell much, as her method didn’t involve talking or explanation. For several classes we simply sat, watched her go through the elegant, simple motions of whisking up a bowl of frothed green tea, then I’d walk out into the bright day with the jolt of green tea opening my mind and eyes in a way coffee never had.

So though there are many stories I could tell about things Katagiri Roshi said, that was not really Tomoe’s way. She was not lecturing on the intricacies of Dogen or Madhyamika philosophy. She was showing us how to make a bowl of tea for a guest. She quietly supported Roshi’s teaching, and kept the place running, making zafus, zabutons and sometimes futons for sale. I remember the wonder of watching her set a futon cover on the floor, in the center of which there was a slit left open of about 12 inches, then laying layers of batting top of it until they were 4 to 5 inches thick, and covered the cover. Then, in a transformation I still can’t understand to this day, with a few flips and folds suddenly the batting which had been outside was on the inside, and with a few stitches and string through the layers to hold them in place, it was suddenly a futon.

My friend told me that most of the women there had mixed feelings about Tomoe. I can only take her word for it. For the men, both monks and lay students, she was sort of that quiet, bright face keeping things running, and taking care of Roshi. To the men and the women, what she was doing was seen as women’s work, I suppose. Plus, she didn’t sit with us often on the first floor. And they both were something of anachronisms to us Americans in the thick of the 70s. They had to both live up to our expectations of being modern, but also somehow carry themselves with that ancient tradition. I remember hearing how Katagiri loved to smoke cigarettes when he first starting working with Americans, but as they associated spirituality with health and purity, he finally had to quit because he was hounded by his students. (I also came to learn he had a fondness for whiskey and cashews, when Tomoe let slip she had to get that for him for his evening snack once.)

So, it’s possible that the women at the center too judged her, by her devotion to her husband, her quiet Japanese way of remaining in the background, and her in some ways staying out of the Buddhist goings on there. The women there were fighting sexism both in American culture, and in the Western Buddhist world, and saw her as a throwback.

To me she was just a sweet lady who raised her sons, and helped her husband as a pastor, not that different from generations of women who’d done the same here for their minister husbands. But that view changed pretty quickly as I watched her make tea. I couldn’t even understand what I was seeing in some ways, but when she knelt before the pot, and began to snap her cloth and measure the powdered tea, she was filled with the power and simplicity that defines the practice of tea.

She was extremely patient with me, with my large clumsy hands, and tendency to lose track of where I was in the ceremony. Her patience and ability to forgive were also tested a few years later when I was a tenzo (cook) at the center, and short of food for the 3rd bowl at a meal during a retreat. I grabbed a large bowl of what I thought was shredded cabbage in the fridge to make a third dish. I learned later from someone else, that it was shredded daikon radish to be used in a traditional new year’s meal Tomoe had been planning for quite some time. No word was ever said to me, but the next morning there was simply another container filled with the painstakingly prepared daikon.

And so, week after week, Catherine and I would go upstairs and go through the ritual of making a cup of that emerald green tea, until we could approximate her motions and attentiveness when she would do the same.

She had also studied ikebana, flower arranging. I can remember I’d put a single flower or bouquet that in a vase for decoration in the room, would look so clumsy and forlorn. Tomoe would take it, and in a matter of seconds move and rearrange the petals, stems, or leaves, seemingly imperceptibly. Suddenly it would reveal such beauty, as though she’d coaxed it into showing it’s true essence.

One morning after class, she turned to us and said, “We’re going to have a tea ceremony demonstration as a fundraiser for Zen Center.” “Ok, not so bad,” I thought. “She’ll do it and we’ll be there as the guests.” Then she added, “Phil, you’ll be the host for the ceremony.”

Now, I prided myself on having the almost same level of ability to say “no” without actually using the word, that the Japanese are famed for. “Tomoe-san, thank you for thinking of me, but really, Catherine is better at it than me. And if people will be paying for it, they should see someone really skilled at it, like you.” She smiled and didn’t say anything further. As I was leaving I thought, “Well, I successfully dodged that bullet.”

When I returned for class the following week, I took my usual place at the guest’s seat, and waited for her to sit and start the class. She smiled her same kind smile, and said, “Since you’re going to be the host in the demonstration, you should start practicing right now so you’re ready.”

I looked at her and saw two things clearly: Resistance was futile. And she was right–since I was going to be the host, I’d better get practicing!

On a Sunday afternoon a few weeks later, the zendo was filled with an audience there to watch a tea ceremony demonstration. I followed Tomoe and Catherine, the two guests, and knelt to begin the process of heating water and whisking up a frothy bowl of green tea. Somehow, I remembered all the steps, from measuring the tea, clacking the scoop on the bowl, wiping it off and cleaning the tea from the napkin with a crisp snap, to presenting the bowl and the tea to my guests and cleaning the bowl and implements.

Relieved that I’d completed the ceremony, I took the bowl with the wastewater, holding it at my side away from the audience, and started to rise from my seated position. My legs had fallen completely asleep, and I nearly put weight on one foot before I’d bent my ankle to bear it. Somehow I recovered, and didn’t break my ankle, or worse yet, spill that water in a terrible mistake of offending the guests.

For all these years my main memory of it was that near-accident. When I told the story on our online group, I focused on that near miss. My teacher Dosho Port, who at that time was a student watching the fundraising demonstration, told me, “I only remember the grace and certainty with which you followed the steps and made the bowls of tea.”

I learned much from studying tea with Tomoe. That compassion and friendliness can be as simple as a bowl of hot tea made well. That the way we present ourselves, and how we move in the world, is not just to consider for ourselves, but to do in such a way to that it creates beauty and peace for others. That there’s no point in arguing with your teacher, most times.

But above all, I learned what I’d realized in what Dosho told me he recalled about the demonstration that day. I’d been so impressed by the power and elegance of that little Japanese woman when she made tea, the way lost herself in the practice and activity, and in so doing embodied the power of that tradition itself. And that a gawky American, if he got out of his way long enough to dive into it, could do the same.