Long ago, after a day of early morning sitting, lecture, and work on the decrepit old porch of the Zen Center, Greg, a more experienced student and carpenter asked me, “So, has Zen practice sunk its teeth into you yet?”  He was asking about that moment when practice has you hooked.  I remember the excitement in this world of Zen which was beginning to open in front of me, how I loved getting a new book, or a new chance to hear another lecture.  Yes, hooked, but also awash in joy of study and learning.

I remembered that this week, as it seemed Zen had again sunk it’s teeth into me.  I also thought of an old phrase from long ago days of psychedelic experimentation, (which is roughly around the same time as my conversation with Greg) and substituted one word in the old saying: “I think the koans are kicking in now.”

This was after a few days lost in reading the history of koans in “Zen Sand,” and a more modern but nonetheless telling of the history of the ancestors rich work, “Acequias and Gates,” by Joan Sutherland.  I seem to have fallen into the deep well of koan study, and don’t mind it one bit.

My beginnings were in shikantaza and Dogen, and that was where I remained, despite a lifetime interest koans–at least in reading them from a distance.  I was always drawn to them, but never had the opportunity until now to really work with them as part of my practice.  And I have to say though I was glad to finally have the chance, I remained cautious for a time.  I was afraid, perhaps, to fall into them too deeply.

Listening to a talk about Ummon’s four sicknesses this week by Subhana Barzaghi , I realized partly why that was.  She spoke of how we can get stuck in an opening, in a glimpse into our true nature.   We keep wanting to stay there, to return to it, or, or to recreate it.  I had a very small such opening years ago, and it was joyful and wonderful.  It made me want to dance around the zendo, and hang onto it as tightly as I could.  As Roshi promised it would, it informed and deepened my practice, and was always there beneath it.  But the fireworks, the desire to dance around, was hard to come by often.  Not the least I think because I was trying so hard to get back there.  For it was small, but just big enough and joyful enough for me to want more of it!

So I came to mistrust that experience.  Or at least classified it as a nice thing that happened that I wouldn’t want to do again.  Though I seemed on the surface to have moved beyond it long ago, to have left it behind, that very coolness betrayed the wish deep within me to have it again..

And I know that wish was a strong part of what was behind the desire to engage with koans—thinking, maybe this is the thing that will bring that joy, that feeling of knowing back to me.  Along with that of course were the defensiveness and protectiveness to not wish for too much.  To not want to say outloud that it was enlightenment I was wanting.

But of course what I find all too often, is that what I think I want is not what I really want.  I understood that as I felt myself falling completely into koan study this week.  The dam bursting open.  Not the dam of understanding held within koans.  The dam with in me holding back from throwing myself into them.  The joy in studying them, in being able to hold one deeply inside myself.

There is the popular conception that koans are about solving the puzzle.  As much as I hear that’s not the point, as a human being I still approach them that way.  And as someone who loves puzzles, who loves getting the right answer, attaining understanding; I held to that idea that this was what the study of them is about.  Like one of those small wooden puzzle boxes you’d turn it over and over in your hand, wanting to find the spot just there where the panel would slide to the side or twist just so, and what was within would be revealed.  Failing that there is always a hammer to get to the inside. 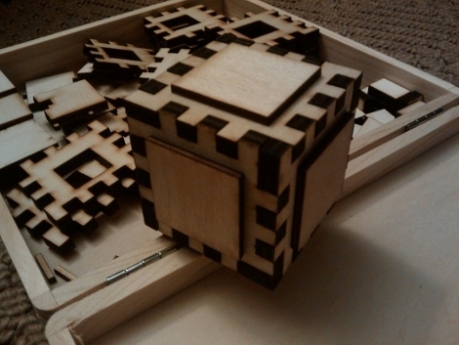 I approach studying a koan that way too.  Instead I find when I throw myself into it, yes, there is a puzzle box there to be opened.   But it isn’t the koan–I am the puzzle box and it is the koan that does the opening.

I am enjoying simply studying the history and the development of koans, the fact that they are composed of two of my favorite things: words and stories and poety!  What’s not to love there?  I take such joy in that study, in being able to make friends with a koan and hang out with it.  I think of the friendship of teen agers, where we’d sit together and ask, “what do you want to do?”  And the reply was always, ‘I don’t know, what do you want to do?”  It’s just like that.  The koan and I can sit and don’t have to do anything but hang out.  I want to see all that is revealed, not to be done with it, but so I can make friends with the next, and the next.

I find myself thinking, I wish I’d started this study years ago, knowing how long it can take to complete all of them.  Then I realize how wonderful it is that there are so many.  It’s a good thing to take up now, in that I can study them for years, probably for as long as I have, and not complete them. Who’d want to be done with them anyway?

I first thought it was enlightenment I wanted to find, and hoped to find it in koans.  But I was wrong.  What I wanted was enlivenment.  That feeling I had when practice was so new and fresh, and had sunk it’s teeth into me, and I was excited to begin the journey.  Koan practice has given me that again.  I think of Rilke’s advice, which is very helpful in this practice:  “Be patient toward all that is unsolved in your heart and try to love the questions themselves, like locked rooms and like books that are now written in a very foreign tongue.”